In the recent opening of Shanghai Disneyland, a lot of people have to craze over their merchandise. Although Mickey Mouse, Minnie, and their friends have been a cartoon icon to children all over the world for many decades now, we do not get tired of them. They are the originals of Disney’s character and will never fade away. The Disney family has gotten bigger as they recently acquired the Marvel and Star Wars Franchise. When you walk around China, you will see a lot of people wearing Disney merchandise. This is also a great marketing strategy as you may want to see Disneyland yourself, too. 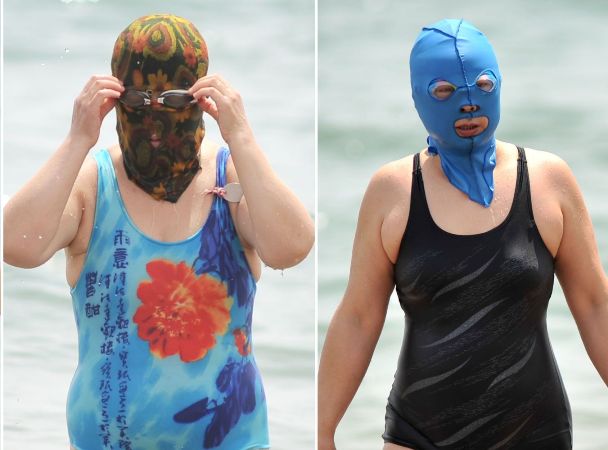 Another fashion trends seen by citizens in China are the Facekini. It was patterned by the idea of burkini that became a headline during the Rio Olympics. It was very controversial especially when the French decided to ban to wear this in their beaches. A local designer named Qingdao decided to recreate the burkini into something of his own.

Facekini is a mask designed for swimming. It is popular to beachgoers who want to protect their skin. It covers your whole face and only reveals the eyes so you can still see as well as your nose and mouth so you can breathe well. Other designers have been inspired by this piece of wear and started to have different designs. Similarly to how fashion trends have emerged, they always look back on history where everything began from the dynasties to controversies such as the rape of Nanking to significant people like the imperial family.

Being one of the most polluted countries in the world in terms of CO2 emissions, Wang Zhijun, a 34-year old designer from Beijing decided to put art on pollution mask. Since it has been a common piece to wear every day, he decided to put a little fashion in it also to gain awareness to the government to do something about the pollution. Being the leading countries in manufacturing, this has caused them to emit the highest CO2 in the atmosphere causing ozone depletion but more specifically pulmonary health conditions to its citizens and nearby countries. The designs on the mask promote art that is different from the ordinary ones hence giving them a reminder to wear this every day for their protection. The designs are all hand sewn and would take two to five days to make them.

Lifestyle in China has also emerged a lot of new things. In 2016, they have started to have mobile payments. This is a very innovative way for the economy to grow to provide faster and more efficient services. However, with technology, you also have to be careful with data privacy. Since everything is system based, your personal information may be hacked and provided to people who will use it for other purposes. Many companies, as well as banks, have ventured towards that direction. PayPal is more popular in the United States, Alipay and Tencent have the majority of market shares in China. ApplyPay and UnionPay will have its name on the market by this year.

Together with mobile payment, online shopping has become a big deal in the China. Popular all over the world as the biggest wholesale platform, Alibaba slams its way to making RMB 120.7 billion in sales. This happened during what is dubbed to be China’s Black Friday. It is when online retailers from everywhere jumped on a join the bandwagon of selling to their most discounted price. Every year, the sales of these online stores or platforms have increased. But this doesn’t necessarily decrease sales in stores since it just paved a way for consumers to have a more convenient way to shop.